How to Propagate Christmas Cactus 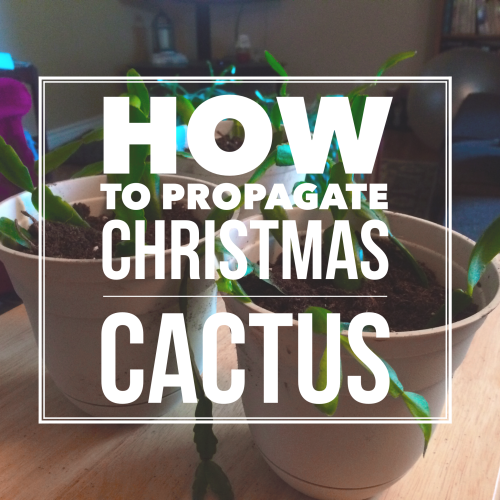 When my grandparents moved out of their farmhouse last year, I came into possession of my grandma’s sprawling but sadly neglected Christmas cactus. She does not remember how long she had it, but the plant is at least one or two decades old, perhaps older. I remember arriving at her house to celebrate Christmas and her eager excitement over showing me the beautiful pinkish blooms on the cactus. For as long as I can remember, it sat with a couple ferns in front of gauzily-curtained windows.
After a few months of research and TLC, the plant recovered and I wanted to propagate cuttings to share with other family members. Here are the steps I followed to propagate – or “start” – new Christmas cactus.

First, I filled three self-watering flowerpots with with potting soil specially-formulated for cacti and succulents. I chose self-watering containers because, from my research, mature Christmas cacti do best when watered from the bottom.

Next, I examined my mature cactus and removed any dead or dying segments. (I try to do this pruning regularly.)
Then, I chose sections that were at least four segments (leaves) long and broke them off by twisting them from the main branches. You could also cut them apart with scissors or a knife. I especially looked for segments that had tiny rootlets already starting.

After that, I planted the cuttings, being sure to bury the joint between the first two segments. The roots will grow from those joints.

Finally, I watered the soil a little and set the pots near a window where they would receive indirect sunlight.
I watered the cuttings weekly and then gave them to my grandma, aunt, and mom a few weeks later.

Have you propagated succulents? I have not had much success with starting other varieties (except jade). Leave your advice in the comments!

Filed under something to try

16 responses to “How to Propagate Christmas Cactus”